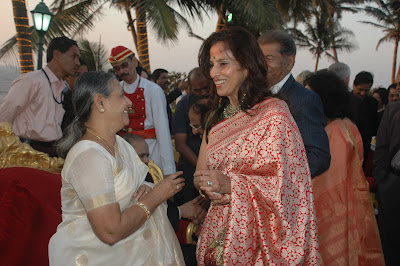 Here's the pic from the Governor's 'At Home'. The gracious lady is the Governor's wife,Radha. I have received a wonderful letter from the Guv himself. I'll post it here tomorrow. Umesh Kashikar, who is the Guv's P.R.O , has forwarded it to me... and I appreciate the effort greatly.

Hrithik Roshan has no business being this good looking! Really! It is these very God-given looks that have become a bit of a liability for the poor man. Yes, one can always say, “Get over it ”. But that doesn’t happen easily. In an earlier hit (“Zindagi….”), Hrithik’s Greek God appearance worked for the character and mood of the movie. Distracting, but apt. In ‘Agneepath’, it’s harder to focus on Hrithik playing Vijay Dinanath Chauhan ( tch-tch… that should have read : Chavan) , simply because he looks far too posh for the role. Put the man in a shabby ganji, locate him in an overcrowded chawl, he’ll still resemble a poster boy for the good life – an Armani model slumming it over the weekend just to check what life is like on the other side of the railway tracks. I have yet to meet a Maharashtrian man who looks anything like Hrithik ( and it isn’t just about those blue-green eyes, or carefully blond-streaked hair).Then comes the performance. Again, it’s hard not to compare it to not-so-handsome Amitabh Bachchan’s original Vijay, with burning coals for eyes and that exaggerated gravelly voice. Hrithik’s interpretation is a more nuanced one – brooding, intense, not half as volcanic.It’s easy to fall in love with Hrithik’s Vijay – it’s a wonder the evil Kancha ( man mountain Sanjay Dutt) doesn’t flip for him!So, does the film work for today’s audiences?Forget the staggering box office records for the moment. The answer is ‘Yes’. And I say this after having shut my eyes and blocked my ears through all that blood-and-gore ( it is one of the most stomach churning films in recent memory, replete with sadistic, graphic close- ups that I couldn’t handle). It is also very dated , with an ambiguous time frame. This may be the reason why it works – with all that rona-dhona, honour, glory, revenge masala we used to lap up decades ago. I wouldn’t be at all surprised if nostalgia for an old-fashioned genre that once defined Bollywood stages a triumphant comeback after this blockbuster. No special effects, no 3-D. Just heavy duty melodrama. And one truly ridiculous scene of Zarina Wahab delivering a baby. Zarina!! But the undisputed superactor in this colourful retelling of an old film is Rishi Kapoor, whose curled lips and heartless sneers speak a new language of polished villainy. Rishi’s Rauf Lala steals the show effortlessly, reminding us once again that genius is all in the genes.
*************
George Clooney and Hrithik Roshan suffer from the same problem – both make the cut as ‘The Sexiest Men Alive’. Trust me, that’s a serious handicap. If Clooney does win the coveted Best Actor Oscar for his role as Matt King in ‘The Descendants’ it would be for playing a cuckolded husband – which woman in her right mind would cheat on someone who looks like Clooney? Geddit?? It’s Bollywood’s way of telling George, “It’s okay, dude. We forgive you for being so blindingly attractive!” It’s poor Brad Pitt’s problem as well. What can these actors do? They are brilliant at their craft. But nobody wants to look beyond their obvious sex appeal. Tough, huh? Well, a guy’s gotta do, what a guy’s gotta do. Good luck, George. About the movie, it belongs to three people – Robert Forster, playing Matt’s father-in-law,Shailene Woodley playing Alexandra, Matt’s troubled teenage daughter, and Nick Krause as Sid, Alex’s chilled out boyfriend. Clooney is a bonus!
Posted by Shobhaa De at 12:59 PM

You are better than professional reviewers this time. I will skip this film. I got similar messages from ladies. Some of them regretted taking their children and they just came out of the movie after some time. George Clooney is too cool while our Greek god is well a true blue one.

The original Agneepath was a larger than life experience, while this one's made - closer to reality..

but the reality is, this movie was very badly dragged melodrama... As you said only Rishi Kapoor's character was a refreshing one.. Hrithik's character is filled wid too much goodness to actually be twisted enough to take on Rauf Lala n Kancha.. doesnt suit him, neither does the hurt of losing his father show on him during the movie..

The movie was a put off rather.. YOu need some thing 100 times better than this to take on the original Vijay Deenanath Chauhan!

M'am nice review. No one can beat Big B's role. Maybe Hrithik, should drastically change the color of his eyes and hair color to suit the roles he gets and get an actual 'sun' tan, to look different, otherwise he will not grow as an actor, inspite of the talent.
BTW Lovely Saree M'am!

Gorgeous saree and gorgeous you!
iam not for remake of classic movies- Ex-Don (Srk just did not fit in)for me Amitabh Bachchan was and remains the originalDon.As for Hritik ditto - i liked eye factor you have discussed so true- I have not watched the movie, from trailer itself i knew its different Agneepath- Mr Bachchans Agneepath was something else, Hrithik is a very good actor but here to I prefer Mr Bachchan to Hritik.
Good Review!

I'm not a big fan of Silk Sari's but you definitely pulled it off quite beautifully. Going for Agneepath tonight...will write my review tomo. As far as SRK goes, my Gosh, dishum dishum between him and Shirish kinda proves how sensitive SRK is towards his movies. He can beat up ppl in the industry but he can beat the public. One should glance at his twitter account...people seriously feel sorry for his situation! :\

While looking for the perfect electronic gadgets or appliances, RightShopping.in has always been the trusted one to consider. Yet again, this trustworthy service has showed its credibility, and the laptop ranges from Sony is what that it is currently concentrating on. One can look www.rightshopping.in/g/itb.asp?C=Sony-Laptop&b=Sony&cid=3 for further details.

Keep up the good work. Best of luck. From www.gifts-to-india.com/gifts_to_Chennai.asp

@goodluck - Don't skip it. It is bang for your buck, I promise. Never a dull moment, so much tamashaa, true bollywood style. That's how we like our movies.

Website is very comprehensive and informative. I have enjoyed the visit. From www.gifts-to-india.com/gifts_to_Delhi.asp

Having already earned the status of the most bankable brand, Apple certainly needs no introduction. This is the brand that perhaps every gadget lover dreams to have, but the proper channel is lacked. RightShopping.in bridges the gap, and the I-Pads are all within the fingertips. The link at www.rightshopping.in/g/itb.asp?C=Apple-Tablet-PC&b=Apple&cid=17 fetches more details of the offerings.

At Gifts-To-India.com you will have a bit tough time. Do not panic, because we have so many collections that you will wonder which one to pick and which one to leave.

Another Kiran In NYC said...

Do give us the dish on the DeshmuckD'souza wedding? Who is in and who is out.

http://kucobaberbagi.blogspot.com/
----
I comes from Indonesia, visiting here to support this blog

Heya¡­my very first comment on your site. ,I have been reading your blog for a while and thought I would completely pop in and drop a friendly note. . It is great stuff indeed. I also wanted to ask..is there a way to subscribe to your site via email?

When your feeling and emotions are unuttered, gifts speak on behalf of you to convey your feelings. Valentine’s day is nearing, and it is high time to spice up your relationship with treasured gifts. For details visit www.indiafloristnetwork.com