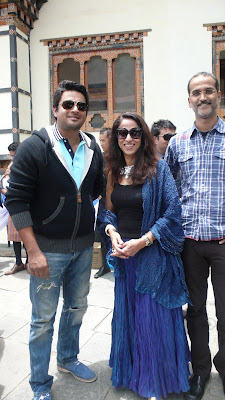 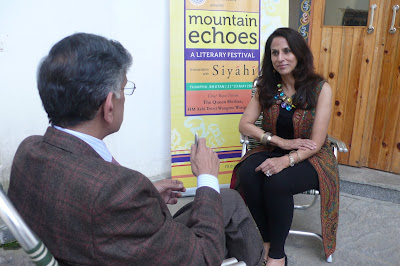 
Happy Birthday Maddy!! Rohan Sippy and Madhavan were just such cool guys to conduct a session with - knowledgeable,charming, sure of their craft. And mainly, no Bollywood airs or sho-sha. Just regular guys who know what the hell they are doing - and do it well. I didn't particularly like 'Dum Maro Dum' and said so in print. But did Rohan sulk and take idiotic personal pot shots? Naaah! He's educated, you see! Ditto for Maddy, who behaved like just another delegate.

I have several Bhutan images - Mt. Everest included!! All I need is some rah rah encouragement from you.... and I shall promptly oblige. Remember - you were warned!

The Yellow Brick Road leading from the airport at Paro to Thimphu, in Bhutan witnessed a strange sight last week, as the local Wizard ( Indian Ambassador Pavan Varma) played host to Tin Men, Scarecrows and several Dorothys who descended on the comparatively tiny( 38,394 square kilometers) kingdom hoping to pass off as heavy-duty writers, thinkers and intellectuals at the third edition of a Lit Fest, appropriately titled ‘Mountain Echoes’. Well, there were fascinating Bhutan-India Echoes at the three day jamboree that was inaugurated by Bhutan’s beauteous Queen Mother Ashi Dorji Wangmo Wangchuk. At 57, she is astonishingly youthful, energetic and charming, besides being an author of two well received books that reflect her concerns for the kingdom that is slowly but surely getting seduced by a world that has so far seen Bhutan only as an exoticised Shangri La. Or more accurately, some vague La-La land of chanting monks and medieval practices. The gorgeous Queen Mum decided to do something about these misconceptions . The only way to find out for herself how her people really felt… how they lived… what their dreams were… was to set off on a padayatra before penning “ Treasures of the Thunder Dragon’. Her Majesty traveled on foot to different parts of Bhutan often trekking seventeen days at a stretch through thick jungles ( over 72% of Bhutan is under forest cover) and crossing mountain passes above 5000 metres ( 20% of the country remains under perpetual snow). She said with a disarming smile when I met her, “I wanted to do this while I was physically fit enough . I would have liked to travel incognito, but that wasn’t always possible. I took detailed notes along the way. I wanted to narrate the story of 21st century Bhutan and tell the world we do not live in a time- warp.” This book comes ten years after her first one… and a lot has changed in the kingdom during that decade.
The sharp, erudite and articulate Prime Minister of Bhutan, Lyonchen Jigme Thinkey admitted as much, albeit circuitously during a lively interaction with Lit Fest delegates. Never mind that some of our self-styled gyaanwallahs were crass enough tell the P.M. on how better to do his job. To his credit, he handled most of this unsolicited advice with a smile, an amusing anecdote and enormous grace. His concerns reflect those of most Bhutanese, who realize their idyllic, isolated life stands threatened by the advent of so-called modernity..Television was introduced in 1999. Information technology as we know it, has altered the cloistered lives of over 10,000 monks, who ensure the teachings of the Buddha ( Bhutan adheres to the Mahayana School ) are preserved and communicated to the people. The Queen Mum writes that Bhutanese monks today adeptly use computers to prepare scrolls of 100,000 prayers to place inside prayer wheels.But so sure is she of the deeply spiritual culture of her people, she states confidently that the Bhutanese have an extraordinary capacity to “appreciate, absorb and adapt.” Her optimistic vision is not entirely shared by locals who point out that though foreign-educated students choose to come back home to Bhutan after acquiring fancy international degrees, the rather charming ( if naïve) concept of GNH ( Gross National Happiness) in place of the more boring, predictable and conventional GDP(Gross Domestic Product) followed by the rest of the developed world, doesn’t quite cut it with the youth. The ever-smiling Prime Minister shares the Queen Mum’s dream when he says Bhutan is proposing a world debate on the true meaning of wealth. “How does anybody define wealth? Is it only about what you have? Or also about what you are?” he asks. Officially, the Bhutanese are meant to take a holistic approach to measure their own Happiness Quotient. This includes chasing prosperity at their own pace and terms but not at the cost of their traditions and customs. On paper it’s a splendid idea. But how practical is it? Bhutan built its first ( and only) airport as late as in 1983. Just 14,000 tourists visited Bhutan in 2005.The number has not gone up dramatically since then. Bhutan is not for backpackers, officials say. Thank God for that! But with the recent introduction of charters from India, Bhutan must brace itself for the onslaught of Unruly Indians ruining the pristine hills and vales of the orderly Kingdom. The trading of tobacco is banned ( no ciggies, if you are a citizen). But alcoholism and an addiction to paan remain rampant. There are no multiplexes, no shopping malls ( the first one is still under construction), no casinos and no coffee shops or bars outside the five star hotels.So how do the Bhutanese keep themselves amused? Shrugged a beautiful socialite who had married and divorced four husbands, “ What else is there to do? I was so bored!” Quite so.
Well, there is the Royal Wedding in October to look forward to… a devastatingly handsome 31-year-old, Oxford-educated King (Jigme Keshar Namgyel Wangchuk) is all set to marry the delicate 20-year-old Jetsun Pema (who did her schooling in India at Sanawar). And is it going to be an extravaganza designed to overshadow the Kate-William nuptials? “Oh, no!” insisted the P.M. when I asked, adding ,“Our King is keeping it small and simple. He is not planning to invite international media, nor heads of state to the wedding. Not even kings and queens from across the world. He is a very unassuming, reserved man.” In that case, I must have clicked a really rare photograph of the couple on the day of their engagement when they casually strolled into our Ambassador’s home which is located on a sylvan 70-acre property (the site was selected by Indira Gandhi). King Wangchuk placed a protective arm around his fiancee’s shoulder and smiled for the camera. Perhaps a fairytale wedding is being ruled out at this point. But don’t bet on it not happening.As for me, I got my fairytale moment with the couple, and I’m not complaining!
Posted by Shobhaa De at 9:34 AM

(encouragement from you.... and I shall promptly oblige)
I guess for us you are an encouragement. And I like the second image. Innocent/focused. What a pic.

Thanks for liking Bhutan, Bhutan's Kings and Queens and the Bhutanese way of life. :-)

hehe pleeeease show us the mt everest pics!!! :)
quite an unconventional queen. Somehow in my head dey are all spoilt silly n vain. Its nice to kno dere r at least a few who are more than silly stereotypes

'Tin Men, Scarecrows, Dorothys'- Good one! Glad you enjoyed there! Great way to be a Royal by doing something constructive. I hope that the bad effects of being modern will not spoil the country.The first to go in the name of develoment are the trees, forests, mountains, and then animals, Lets hope the develope with caution.

Another Kiran In NYC said...

Loved the interview piece. Our little glimpse into what happens at a lit fest. I am so glad you choose to write in the moment when events are happening and your perspective and opinions are fresh. For me, you are quite literally one of the window panes through which I can look into contemporary India.

I am cynical about the idea of Gross National Happiness espoused by the Bhutanese government. That kind of Happiness is all very well, for the well off who have the means to access ideas, opinions and lifestyles that allow for a more modern and prosperous life. But what of the poor?

The photos are lovely. The engaged couple looks very elegant. But I wonder about their age difference. 31 to 20 or something like that? People a decade apart speak and think in different languages, especially in the fast changing world of south asia. Still, I wish them happiness in their life together, assuming K2 does not take on additional wives against her wlll.

And Madhavan... always hot. never mind if he is in the cold climes of Bhutan!

Your perfumes, jus like your dressing style, reveal your true colors for fashion statements. No matter whether a branded one or non-branded one, it should just like your mood. When your are sporty, or when having a great time at the dancing floor, or a romantic evening with your sweetheart, on each event you are in different mood. Likewise your perfume choice should also vary. Visit www.store4perfumes.com for details.

Bhutan can be next Singapore. Sounds so great yaar. I salute the queen mom and their PM for such a dedication towards their nation in more clever and healthier way. I've learned something similar like this from Lord Buddha's book that "we should not wait for old age to get enlightened or awakened, rather start doing it while we are young and capable of." Thanks for sharing this wonderful article and pictures. You looking stunning as well, more then that your writing shows your level of intelligence which makes you double times sexy @ sixty.

Did you know that you can shorten your long urls with AdFly and get money from every click on your shortened links.