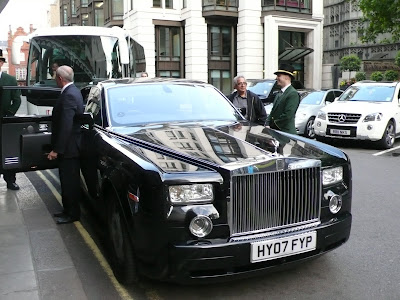 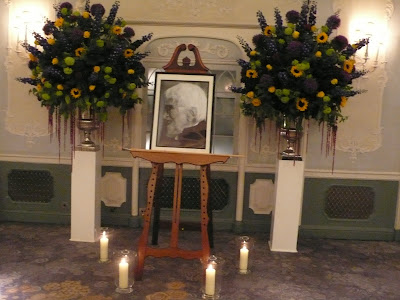 These are the final goodbyes...
On the 6th of July, the Jehangir Art Gallery in Mumbai is planning a tribute to M.F.Husain. Let us hope and pray it honours his spirit and does away with boring, insincere speechifying by pompous asses who barely understood his genius... or even knew him for the person he was.
****************
This appears in Hi! Blitz....

If there’s anything and anyone worse than a bloody bore, it’s an intellectual whore. Puzzled? Okay… tell me you really DON’T recognize the following types : The I.W. s generally hang around at Embassy and Consulate soirees, clad in dreadful kurtas ( both men and women). They have perfected the art of crashing these parties over twenty long years of serious sucking up. That makes them permanent fixtures on lists that rarely get updated, going by the attendance of these cheapo fossils. Some are desperate enough to cultivate each successive social secretary and treat these lower level officers like visiting royalty. It’s the sort of treatment those poor sods are entirely unaccustomed to back home. But of course they revel in the importance so lavishly showered on them by these moochers. The only reason for the heavy-duty spongers to turn up night after night at these events is for the free booze and food. Some have become experts at figuring out menus and alcohol brands on offer from host to host. They turn up their noses at parties hosted by the old East European block of kadka Commies who continue to serve cheap vodka and stale sausages. They flock to German evenings for the superior beer and better sausages. The Brits are broke these days and such are the lean times they’re facing, even a toast at Queen Lizzie’s birthday dinners is raised with local, lukewarm champagne. No matter. The idea is to go scrounging around for whatever’s on offer… and bore the hell out of everyone present.

Mumbai’s I.W. s fall into another category altogether. They prey on corporate types. They love Bankers the most because those guys have amazing expense accounts, plus entertainment budgets and serve rare single malts at their do’s. The Mumbai I.W. loves to name drop – in the old days it used to be the names of famous artists like M.F.Husain. Now, it’s strictly Bollywood. But since the fake ‘intellectual’ tag has to be lived up to, the I.W. throws in social issues and municipal matters to demonstrate the existence of a conscience. Armchair activism gains a few extra points if the person can confidently ‘lagao’ something vague about a meeting with the chief minister. If there’s an arty, museum connection somewhere, that’s still better. A few mentions of an obscure Biennale generally impress the ignorant. All this ‘haw haw’ talk is interspersed with heavy duty bragging, generally about Delhi connections – Ministry of Culture, Sheila Dixit or Montek Singh. The last two names interest the tight ass Bankers present and ensures another round of a 21-year-old Single Malt. Net -working being the name of the social game ( does nobody meet just for the pleasure of spending a pleasant evening together , anymore?), it is vital to use nick names known to the inner circle and then exchange knowing looks with those who ‘get it’. Woe betides those who don’t! Social death guaranteed. Then comes the worst part – asking for favours. These can include anything from a trip to a foreign destination ( with companion), to an out-of-turn allotment for something significant ( car, apartment, land). The modus operandi remains the same in both cities. The I.W. stands in a prominent, well lit corner and starts sounding off on the controversy of the day ( Radia, Amar Singh, Lalit Modi). Insider gossip ( rubbish! It’s mostly recycled junk) is traded with a small group over several rounds of whatever is going – after the third drink nobody knows, counts or cares.
The Arty Whores are a breed apart. Their sole purpose in life is to confuse and confound those who may be genuinely interested in understanding art. Their prose is dense, almost impenetrable. They spout dated clichés about assorted European ‘movements’. Their pens and the artists’ paint brushes they represent, are both for sale. Reviews have no validity, nor do their pseudo-intellectual ramblings in pricey catalogues ( they charge a whack for writing those dreary, ponderous pieces). You can spot the pompous creeps at art openings, hanging around looking for – you’ve guessed it – free booze. Once sufficiently tanked up, supremely annoying, mostly inaccurate arty gossip takes over – which canvas sold for how much at the Christie’s auction. Which painter is on the make and doing which young, hot art dealer. How art prices are being manipulated by the art sharks… and isn’t it terrible what that art bully did with the attractive newbies participating in his art camp!!
What do we do with these bores and whores?
Jettison them, of course! Uno dos , tres… and out you go!
Posted by Shobhaa De at 10:57 AM

But such guests are also found uninvited in many marriage parties and no one knows whom they represent:)

True. These arty whores are in large numbers and easily spotted. They have long noses to sniff info about art or networking parties. Real bores!

Frankly speaking, this is your world. I dont have any clue about these. But the rhyming is catchy.

Love you, love you for this one! absolutely hate these pseudo-intellectuals. they're everywhere! even in this small, unknown town in Northeast India that i'm from/in, you'll find I.W.s galore.

aren't you one IW. i prefer to call you Bloody W...get lost

I have left a comment agreeing with your views on TOI latest blog of yours one hour back. The moderator did not allow my positive comment while allowing all negative, abusive comments to be published.

“A friend in need is a friend indeed” Alas such friends are so hard to find these days.

I was looking forward to see that bollywood Buddha but sadly the art bully have choose to take control of it!

Same kind of fakes can be found at musical evenings.....whether they understand music or not is anyone's guess . But most important is to be seen and mingle with who's who of the society, about which they later post on their Facebook wall.

I do not understand why you of all people write about "I.W"s.... Get real lady...

Get all your favorite spirits and wines at Duty Free Depot!