Penguin Car on the prowl.... 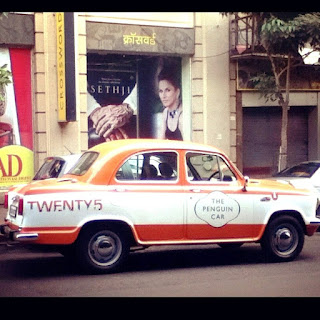 
This appeared in The Week recently.....

Women and funerals
Mumbai has limped back to normalacyl after the mammoth funeral of Balasaheb Thackeray. I watched his final journey with a great deal of interest… especially the composition of the cortege. All eyes were on the members of the Thackeray family as they clambered on to the flower bedecked truck that would carry Balasaheb to Shivaji Park for the first public cremation at the historic venue since 1920 when Bal Gangadhar Tilak was granted the same privilege. While most observers and journalists focused on the presence of the estranged cousins ( Raj and Udhav) , desperately looking for signals to decode (“ will they, won’t they… hug and make up? ”) their current equation, I concentrated on the women of the family… the two daughters-in-law ( Rashmi and Smita), plus, Sharmila, Raj’s wife. Their body language was even more fascinating to monitor. There is something about the nature of our funerals that is unambiguously macho, in that women are almost always excluded from active participation in the proceedings. That may have had relevance in another era, when the supposedly delicate, fragile nature of grieving ladies was given due consideration and their tears were shielded from public view. They were expected to mourn their loved ones in the privacy of their quarters. They could beat their breasts publicly only when allowed to do so by village elders.
The story has altered  but a little. It is still the men of the family who take full charge and conduct the all-important last rites. It is they who light the funeral pyre and ensure the ashes are strewn in a holy river. Women remain on the sidelines, passively watching the ceremonies, holding back tears and consoling young children, mainly daughters. Little boys are sometimes required to become men within minutes of   losing someone precious – a parent. It is heartbreaking to note at such times that the ‘man of the house’ is an alarmingly young lad, forced to confront tragedy head on and fulfill his duties at the funeral. In traditional societies, this is how it is, this is how it remains. But there are progressive families that have boldly defied age-old traditions and literally taken matters into their own hands. I remember the spirited  Mallika Sarabhai performing the last rites of her father , the legendary Dr.Vikram Sarabhai, much to the astonishment of the conservative elements within Ahmedavad society. It was a pretty strong statement to make at the time and expectedly, it generated a great deal of comment.
The Thackeray ladies were discreet and dignified through the long ordeal, that saw both Raj and Uddhav breaking down and sobbing. Balasaheb’s grandchildren put on a brave face and it was left to young Aditya (Uddhav’s son and the leader of the youth wing of the Sena), to console his father and take charge of  arrangements, even as his female cousins stayed close to their mothers, away from public glare. Apart from Sushama Swaraj, Maneka Gandhi and Supriya Sule, there were hardly any women present near the pyre, as four priests chanted the final prayers and logs of sandal wood were arranged over Balasaheb’s frail body.
Weddings and funerals are excellent indicators of how women are placed in that particular society. While the modern Indian wedding has been rapidly and attractively democratized during the past two decades, with women playing dominant roles, our funerals are  stuck in ancient times, still excluding women from the many rituals involved. Elders insist this practice has something to do with ‘impurity’ ( read: menstruation) that ‘defiles’ the sanctity of the solemn ceremony.This is so depressingly retrogressive! Women, no matter how educated, how liberal, how successful… eventually have to deal with that Great Leveller – menstruation! I have discussed this delicate issue with progressive priests ( yes - they exist!), and they plead helplessness. We can’t change the shastras, they point out. To which I argue, it may not be possible for them to change the shastras, but surely, even the shastras are open to interpretation? Concepts  of female impurity must be thrown out of the window once and for all. Especially during occasions that demand an intense emotional engagement. Like funerals. Here’s a confession: I have attended several funerals of loved ones – too many, alas. And have organized a few personally. I have broken and bent a few rules while performing the last rites. This, I have done, with full faith in my actions, knowing that my abiding love for the dearly departed would overcome whichever lapses the officiating priests would later discover. And yes, years ago, I have done this while I was menstruating. My private pact with the powers that be in heaven above, provided the required protection. Sure ,I defied. But I neither defiled nor felt defiled. I did what I had to for the person I loved.So help me God.
Posted by Shobhaa De at 2:13 PM

I agree with you ma'am. All people in the society should be treated equal in all occasions.

Funerals are sordid affairs. Many women are thankful that men take over.During periods, many women have high stress levels and bleeding.

thanks to jogeshwar ,finally read your interview- good one ...sirji /sehji and shobhaa de.
i know shastras say so,its true all what you have said about women exclusion sometimes its worse. ,i think if our intentions are clean thats all that matters.No point explaning those who wont understand instead do what you feel right and brings harmony to the heart.

Not only the shastras, no one dare to change any kind of books of that category. Same theory goes with our constitution "we are helpless, we can't change it" I wonder about the consequences if the same theory would have applied in technology too. Lets say there's a bug in windows and Big Gates say "I am helpless, i can't change the programming"

I really loved this post especially as you pointed right at the problem. The impurity concept associated with mensuration is very rarely discussed but widely prevalent in Indian society. As you mentioned it in context of funeral processions I can associate it with women not allowed to go to temples, perform any puja during those black days ( as I call them). In the typical orthodox families, they even don’t allow women to enter kitchen . Even in the educated families at least I see elders disallowing females to worship and perform any religious rituals associated with GOD. This is so illogical and unreasonable. Women have not created themselves to menstruate each month. If God has created this then how will God get offended by it.

Let's not blame the shashtras. It's a medically established fact what changes women undergo-physically and emotionally-during those 3-5 days. They are not allowed to do any hard work. It's a compulsory vacation for them from the daily household chores. It's only in the genuine interest of women that our ancient shashtras have stipulated this strict regimen. In the name of women's liberation, don't forfeit your rights derived from the shashtras. Ok, Ma'am, can't you keep quiet at least for those 3-5 days, and still enjoy life by simply relaxing? Think it over again.

In Buddhism, most of ancient outdated Hindu traditions were abandoned happily. Gautama Buddha said so! And rest of the teaching remained same between Hindu & Buddhism!!!! Perhaps, for better!!! <3 Shobhaa De you did the right thing! There should be no room for doubts & mix-feelings!

Apparently! Just like Tavleen Singh's latest book; there's always a self proclaimed pundits in every age. Be it politics or religion. Thankfully, we don't buy them easily unless it's a fiction with good sense of humor. Rest of course nothing but JOKE!!!

About the Impurity Concept, I along with a friend have researched a lot, both scientifically and through the Shashtras to realize that the dogmas prevalent today are rigid forms of a particular interpretation of the Shashtras... As it's an embarrassment sharing your views in public on this matter, many girls though initially resist it, later learn to adjust accordingly rather than mere complaining... But, I and my friend refrain ourselves neither from regular exercise nor from even going to the temples and we know if God isn't punishing us, then, we needn't be accountable to others... After all we can't afford idelity and laziness for four days every thirty days...

And thanks a lot for discussing the topic... We few fourteen-years indeed adore you a lot...

You raise an important point. In fact, a change may just be around the corner with more and more women choosing to quietly "disobey" such biased strictures. While there are societies that celebrate puberty and menstruation, we stay mired in the belief that menstruation renders a woman impure. Yet, the failure of a woman to menstruate would result in her becoming almost useless from the parochial religious viewpoint, as she won't be able to bear children...more specifically, sons.

Women and gathering have always had conditions that restrict their participation at par with men. That a woman can't enter in a Muslim Graveyard to witness the body of their dear ones meet the earth, remains unchallenged, however progressive the woman or the men around her are. Here we reach at an interesting point in religion, a few things about faith system have to be just practiced until you renounce your belief in organised religion.

Great Post!!!
Get Tech Updates at TechTantrik
Enjoy Funer Side of Life at TheRoyalPoke

BlueHost is ultimately the best web-hosting company for any hosting plans you might require.