Couples who drink together , stay together?? 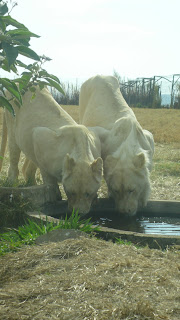 I was really , really lucky to get a grab shot of these two. They'd just polished off a gourmet meal (zebra) and needed to wash it all down at their favourite watering hole. I was less than three feet away.... but did they care?? I think they make a pretty compatible looking couple - when was the last time you shared a companionable drink with your partner, huh??
I have a pretty grisly shot of another, older lioness devouring a zebra leg. Would be happy to share the image .... if you have the stomach for it.
*************************
I escaped from my concentration camp at the ZURI in Goa, long enough to rush to my temple, Mangeshi, in Ponda,where the family deity resides. It is mangalwar today, and Shantadurga would have been most unhappy had I ignored her. Both the darshans were soothing and inspiring. There was hardly anybody around at 7. 30pm.... so I had both the deities all to myself, with none of the standard shoving and pushing. I took my time telling them mere dil ki baat. In fact, I enjoyed a long, uninterrupted chat with the Gods after ages. This was such a well earned treat. Last night too, the shoot ended at 3 a.m. Now that Dino Morea has let the cat out of the bag, thanks to the tweeting mania, there's no point keeping the shoot under wraps any longer. All you guys out there are going to envy me.... I am here to judge 'The Perfect Body' for the Kingfisher Calendar 2010.There are 12 girls competing for just one slot. You'd think they had their wor cut out for them - but trust me, it isn't fun waing up at 5 a.m. for a run on the beach , after wrapping up at 3 a.m. the previous night. But.... so far they are still smiling and coping. The elimination rounds have begun.... so I expect the tears to flow , starting tomorrow. I shall keep you posted...
Posted by Shobhaa De at 10:58 PM

The pictures are wonderful! I like the way u keep ur posts short n sweet. I think thats an intelligent idea too coz this way readers won't push this aside as a time killing task.

Hello Mam!
I eagerly await your post the whole day. Really appreciate your simple yet strong style of writing. Please do keep us posted.

I am The child always.

couples who drink together, stay together... lol...

Mam,
I have noticed that many great people can manage with barely a few hours sleep everyday. Mr. Big B is another example, CM of TN is an octagenarian who only sleeps for 3 hrs everynight.

Poor zebra.
Couple who drink together, who smoke together, who plot together all stay together. But if one does not toe the line, then the trouble starts.

Your "Speedpost" is evergreen. How about a "Speedpost-II"?

I would like to invite all of you to join blogging Social Netwrking
IEDig.com
which helps you to get more visitors to your blogs and you get the chance
to meet other celebrity bloggers.

How daring!:) I presume you were in cage- what a paradox:)

Wow, great shot. Thanks for sharing the "sharing"

Runners(?) may come and go but the only few names that remain with us are Milka singh, P.T.Usha,Shiney Abraham,Ashwini Nachappa. Shobhaa, you are also an athlete.Your facial bone structure has some similarities with Usha and Madhu sapre. All of you are athletes. I felt sad when Usha burst into tears in Bhopal. We dont deserve Ushas. I can remember the excitement generated by her during the Olympics and how her name became synonymous with running.

The sharing part is very interesting. No matter how busy we are I do make it a point to have a drink with my partner every weekend at least and then a movie and dinner date.
*****

It is indeed always difficult to achieve anything in life, even if it is a place in the glamour industry. It is the faith and belief in oneself that can keep you going. Although things may get rough and tough but as they say survival of the fittest. And he who survives comes out victorious.

O! though i am the chai kaapi fella... i do enjoy watching men with their wifeys drinking wine and beer together.. its orgasmic a sight.

Dino tweets very little. and he doesnt respond to the tweets of aam aadmi's and aam aurat's...

never lovelorn, this munda is born to love...

He is never portrayed as the "poor loser" by the press. and even if there is a moment, he emerges back with new-found vigor. He comes back to love... with the same confidence and charm.

Young couple indeed, considering the fact that the lion's mane is not fully grown.

I hope carnivores of the two-legged variety aren't eating any zebras though.

A lesbian couple.
Thankfully I agree to homosexuality.
Gee,would love to have your job.
Judging or writing.
Well the writing part more.
But the judging too isn't bad either;)

Lovely picture. Thanks for sharing this with us. My husband and I have a glass of wine everyday after work. Its good to sit and talk/vent about day to day issues. Well...married for only 3 years. But we hope we can keep up this habit.

Today is Karva Chaudh...I wish I were home in India. Would have been loads of fun. Happy karva Chaudh Ms. De and all other women here!

Couple who drink together stay together...till the water lasts...what happens then?

Nice picture.Sometimes pics are able to express what words can't.

g8 pic n liked the title "Couples who..." but Indian woman do not drink still their marriages last till death lolllzzz.

Being an eye candy is not a cake walk.....all the best for all the contestants.

i liked the comment of Gyanban who says what will happen after the water is over. A stage comes when water does not last and u have to just enjoy the company in spiritual manner without water. Still it is good and satisfying to be together.

All encounters makes you rich in experience and life worth living.Encounter with couple or God or Kingfisher girls have same flow and tune.

ya the pictures are really superb...