The sand sculpture says it all!! Do Knot Dishturb!! 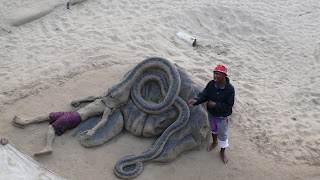 I can't get South Africa out of my system. I took this shot in Durban, along a deserted seafront, where I was told it was insane to pull out a camera or cell phone. Well, I did both and am alive to tell the tale. On both sides of the jetty, there were these incredible but disturbing sand sculptures. Locals warned me the artists were dangerous druggies who lured innocent tourists into admiring their work before robbing them. Forget all that - just look at the morbid subject. I thought it was it was pretty apt, given the situation there.
****************************
Just to cheer myself up, I went to see my all time favourite actor Govinda in a delightfully ludicrous movie called 'Do Knot Disturb'. What disturbed me about the movie ( which I thoroughly enjoyed, btw), was the luscious Sushmita's enormous girth!! She resembles a tub! Why the blubber? And how does it all vanish when the credit titles roll in the end and she performs a hot item number, ironically called 'Bebo Bebo' ( a tribute to Kareena?). Govinda was adorably insane, especially in the scene where he speaks in a female's falsetto, and shakes his errr, tits ... to a chant of 'Dolly Dolly Dolly' each time Lara comes into the picture. Riteish is really coming into his own as a comic actor par excellence, and looks almost hot on the yacht.It's a thumbs up for me for this madness. It's an instant mood elevator and you can go ahead branding me a philistine for enjoying the film. I'm like that only!
We headed to TOTE, Mumbai's sprawling new eatery ( at 35,000 sq. ft. it becomes the largest stand alone space in the city). Since it was Bapuji's janam din, and the bar upstairs was shut, I shall have to return a la Napoleon, to give you guys a poora poora review. But for now, let me just say, the sous -chef Manish Luthra outdid most chef-chefs in the business and produced a top class meal, starting with an appetising duck burger, lamb shanks, pork chops, and a delicate rissotto. Do I want to go back for more?? Hell, ya!!
But a return trip shall have to wait. I am off to Goa in an hour to judge a sexy reality show ( my lips are sealed!). I'll be holed up there till the 15th. But, worry not... this time, the laptop goes with me!! Ciao Ciao, my lovelies!
Posted by Shobhaa De at 12:33 PM

This blog is a mood elevator ;)

Heard it 1st time.
Luring and robbing,pretty innovative huh.
Thankfully the laptop follows you and so do I:)

well!! I loved the way you described Sushmita with her enormous girth;) neways I was waitin for a blog on India's easy departure from the Champions league. what do u have to say abt it...however,I am eagerly waiting for de details of the Goa extravaganza;)

waiting for ur posts from goa...

and the reality show ofcourse...

Govinda is the saving grace in Life partner too. Highbrows may give all the stars to WUS, but Do knot disturb has the David Dhawan's touch with his favourite Govinda. Glad that you are not a pretentious hypoKrite.

artists were dangerous druggies who lured innocent tourists into admiring their work before robbing them...

This is the otherside of SA. Thanks for showing it.

"artists were dangerous druggies who lured innocent tourists into admiring their work before robbing them..."

someone actually told you that??!!
i guess your minders were rather over-protective.. or something..

or maybe it takes a lost of drugs and some bouts of insanity to produce that level of creativity... they change these everyday, btw. sometimes borrowing from an archetypal presence of folklore, sometimes mimicking the monstrous new developments in the city (eg the new moses mabhida stadium in durban) ... the irony of their near perfect depiction felt in the fact that developments such as those serve only to further decimate street people such as these artists in the eyes of the world.

such is the life of an artist, one supposes... possibly a crazed, junkie, madman luring tourists to their doom with smiles on their faces :)

regards and much love from a South African,
--and a fifth generation NRI--
in Johannesburg, SA

i think Govinda, Ritesh and Lara stole the show of DDD. i was quite taken aback that lots non indian esp in kuala lumpur watching the movie regards balan

Today's Bachchan's blog is a great read. His father may be a poet, but the son is a fantastic writer.

Shobhaa, you have great competition.

mz de, great pic, as always. love the sand sculpture, please share more photos, please! since you mention "sexy" reality show, it can't be bigg boss! even the august presence of the Man cannot lift this show from the pathetic depths it has sunk to!! i am going to give DND a chance now that you mention sush's and govinda's avoir dupois!!

Wowie! Super! Jhakaaz! This sand ka sculpture is Class. It brings me to a comparison. As compared to this our much celebrated modern art, according to me, is just make-believe crass.

o! u are a govinda fan! So am I. I just dint like his Mustached karishma kapoor era. But since deewana mastana "im feeliking.. okay.. i am feeling nice... i am feeling better" and am taking baby steps of laughter every now and then.

***********************************
Sush should be little hush-hush about her personal life. Her Boyfriend Mela is eating up her Mother Teresa type image. Once upon a time, long long ago, Young Miss India chokris had Sush as their idol. I find her effervesent and intelligent today too. But some where she has lost in the PR management front.

...And look at her kamar, It is more like a Kamra and she on the whole looks like a rounded Gamla.

She definitely is not ageing gracefully, but is for sure doing so distastefully.

So did the other Miss Universe "Lara" manage her career very badly in the beginning. But post kelly I feel she is concentrating more on her career.

Sush definitely is not ageing gracefully, but is for sure doing so distastefully.

Govinda is silly, crappy, dirty, sick... yes yes yes... but who wants to intellectualize every scene and think deep... ???

I feel David Dhavan flicks are for laughs and are no brainers. And while looking at these films you cant compare them with a hrishikesh mukherji type comedy or so...

DavidDhavan is david dhavan... and he is a brand himself. Though all his stuff is chorried from the south. He chories and adapts them intelligently with pun and fun for the hindi audience.
*********************************
And yes, people would think of you not being a good critic of cinema if you say that you like such films... But what the heck... its a film. And a film is open for interpretation. No two minds could rate a film in the same way.

Even a film like sholay, i dare to say, dint touch me. I found many parts of sholay shoddy... So what, would you hang me... or pass a verdict that i am a novice. hehhe.

We should appreciate the difference of opinion and not start treating critics word as the gospel truth.lets agree to disagree at certain points. lets grow up!

Eish... (as we say in South Africa), meaning a variety of things, mostly reflecting frustration, pain, disbelief, being annoyed etc. As a Durbanite, and as someone who goes past those sculptures regularly and gives those guys money, because the only way they will have a meal at the end of the day, is if you give them some change, I am shocked at your lack of understanding at why they create those sculptures. In the same way that the guy who plays a saxophone in a New York Subway to earn some change to get a place to stay for the night, does something without robbing those who travel through there, these guys make sculptures. They are not criminals (sadly us middle class folk, have been conditioned by the media to see all poor people as criminals), nor are they waiting to pounce on every single unsuspecting tourist. The sculptures may be disturbing to the outsider, but maybe poverty does that to one.

South Africa is one of the most unequal societies in the world, because of our government's neo-liberal policies, which has created huge levels of poverty and unemployment (over the last 15 years). You may have seen the shack settlements while whizzing through Durban... they are very much like the slums in Mumbai and other huge cities in India. While we enjoy the luxuries of middle class life, the poor have to find some way to survive too. Some steal and others use their art to make a living.

Sushmita's girth got u'r notice but not Govinda's? Odd. Or is it that for women it's her shape that matters while for men it's the shape of his wallet?

As a native of Durban, I stop to admire the sand sculptures regularly and give money in appreciation, never once have I felt unsafe. This is the first I've heard of them pouncing on tourists and robbing them. I've taken tourists who've captured
pictures and given money, no hassles. We're proud of Durban's sand artists who work so hard to earn a meagre living.

Superb sand art!! when i click and zoom, its whopping, thanks for sharing Shobha.

Nice article. Reading your write is a treat. I love your writing and i have always preferred you over the complex JugSurya (cant spell his name) or Swaminomics (no disrespect to anyone here)when you used to write for Times. Great job Shobha...and inspired from you I am my friend are in to writing (its meant to be fun)...Read our posts on (http://southindianpuranpoli.blogspot.com/) and we would be delighted if you visit ours :) and comment :)