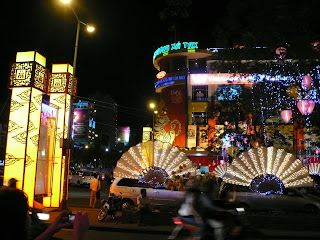 The pic is of Saigon's busiest street, all prettied up for the Chinese New Year. I bought myself a gorgeous croc bag at a boutique here - relax - they farm crocs in Vietnam, issue certificates, and it's perfectly legit. Okay??
************
Strange, how certain destinations manage to capture the collective imagination of world travelers and become magnets for those in search of the asli experience. Pune’s German Bakery was one of them. It still beats me how it got to that position, considering what was on offer. But there is no doubt in my mind that GB was up there on most lists as a ‘must visit’ hang- out for anybody who wanted to get the Pune vibe, take pics sipping coffee at one of those rickety tables, and immediately upload and post the images on face book. When I saw the tv coverage of the devastated café last week and heard the shocking details of how effortlessly it had been reduced to rubble by cowards hell bent on killing innocents, I immediately called up close friends who lived in the vicinity and with whom I had frequented the place over so many years. Yes, they were safe. No, they had not lost a loved one. But they were furious, and hurting.
The German Bakery attracted all types. It wasn’t for the food ( indifferent ), it wasn’t for the service (interminably slow), it certainly wasn’t for the comfort ( God! That awful seating). And yet, there it was prominently featured in top international travel guides, including the Lonely Planet. Perhaps, that is what did it in – its immense popularity. To say the German Bakery represented Pune, would be entirely misleading. Which Pune are we talking about? Did the average Punekar from Shaniwar Peth even know about its existence? Or are we talking about the Koregaon Park-ers – the smart set, and the Osho residents – the even smarter set?? Who makes a destination rock? It’s the same question one can put to the high visibility enjoyed by Mumbai’s Café Leopold – also targeted by terrorists in order to create global outrage. Like the German Bakery, Leopold’s has always attracted a floating crowd of back packers in search of local thrills. But at least Leo’s has good food at sensible prices ( the chilly beef!! Oh, for a mouthful of that amazing chilly beef! ), and the service is brisk. Both cafes shot to stardom thanks to word- of-mouth publicity. They were dubbed ‘cool’. They were considered hip. People went to ogle ( OMG!! Did you see who’s at that table? Is it…? Could it be…? It is!!!). To be seen… and later, to talk about it. This is the power of unpaid testimonials. This is precisely what makes or breaks places.
Unfortunately, it is also this that attracts the attention of terrorists.
The terror attack on Pune ought not to have taken us off guard, given all the prior warnings. But it did. Pune staggered back to ‘business as usual’ mode almost as swiftly as Mumbai invariably does ( what choice does anybody have?). The shocking part of such tragedies is just how soon people are ready to shrug, and say, “ Oh well… terror happens,” and resume their normal activities. Punekars reported that bar and club owners in and around Koregaon Park waited for no more than a couple of hours after the blast, before sending out reassuring text messages informing those who had paid a hefty charge for Valentine’s Day celebrations the following evening – ‘The party’s on! No cancellations!’ So much for shock and sympathy for those who had lost their lives. It’s a bit too late in the day to rewind what happened at the German Bakery and wonder whether it could have been prevented. It is also a bit absurd to defend security lapses and say it is impossible to check every back packer who strolls in and out of popular joints. What is the solution in that case? Should the owners of the German Bakery take their cues from the owners of Leopold’s Café and put the place back together without camouflaging the ghastly reminders of the attack? Leo’s has deliberately not plastered over the bullet holes of the 26\11 attacks and those in turn now provide fresh, almost macabre photo- ops to tourists flocking to the place. It is a perverse sign of our times that we seem to be fascinated by events and destinations that remind us of tragic, terrifying calamities we would be better off putting behind us. I asked myself, “ Will you visit the German Bakery on your next visit to Pune?’’ The answer is , ‘Yes’. And , Like I said,it won’t be for the food or service. Will I be wary of the backpacker at the next table? Perhaps. Will I look under my own table to see if there’s an unattended package? For sure. Will I be doing this to show some sort of weird solidarity… to prove a point?? Ummm… I dunno. But, visit German Bakery, I most certainly will. I won’t sigh, “ Just like old times,” because those old times are over for good. These are the brand new times. And they are seriously nuts.
Terror tourism has come to stay. We may as well come to terms with it.
Posted by Shobhaa De at 8:22 PM

Indians are immune to pain and suffering, especially others' suffering. The Kalinga war, Mahabharata, Ramayana, Moghul invasion.. our country has a violent and wicked history.

For the Americans and Chinese, every life is precious, they will go to the ends of the world to defend their citizens.

We have 'freedom', but it is an illusory freedom. We are free to get shot or blown up, one never knows who the next target is.

Add to all this our disaffected rural populace, maoists, and sundry other freedom movements. What we have is a disaster (revolution?) about to happen. While other countries change their constitutions to reflect changing realities, we are like the ostrich with is head in the sand.

Things always happen to others, not to us. Mumbai is normal, to hell with tragedies.

India is the greatest tragedy..

Pune blast was sad, but here is greater danger in Maoist violence. 24 security personnel were slaughtered in Silda. can we have your views please.

from your previous views about this topic, i feel you are just being too emotional and passionate and not analysing the situation like it is supposed to be done.
Is terrorism really our huge problem? Is pakistan our real enemy? On one hand these people are up in arms about paki cricketers playing for us, on the other they allow bagladeshis to enter the country illegaly for muslim votes. We just like to blame shift and ignore our real issues. Pakistan is so messed up they will blow each others up eventually, they are the least of our problems.

OMG Shobhaa,
Please don't breed beautiful and innocent animals to cut them and wear their skin.
Pleeeeeeease, stop it right now. Put that bag in a shredder. Become a veggie. Even chicken are bred for people to eat. They too are innocent. Please don't kill them.
No gr8 honours for breeding and then killing crocs, even if it is legal. In my eyes this too is terrorism on these so called bred animals.
We commoners expect people like you to set social codes and ethics.
This certainly is not a thing about you that I would like to follow.

These are "brand new times". You're damn right, they are! Frisking & checking of bags at malls, movie theatres etc. have become a way of life. We never got frisked or had our bags checked except at airports until about 5-6 yrs ago. I have a bad feeling that we will have to live with it for the rest of our lives, and it would be "absolutely normal", "way of life" for the generation after ours. Which is just so so sad.

mz de, such grief about blast and victims. terrorism has won today, i guess.
ps: shahrukh's rendition of "mary me" and kaajol running from him, reminds me of the alpenliebe crocodile chasing her all over the place, yes? and if you read my blog, i have said the same thing about the tigers: farm them for their stuff like south-east countries have done for the crocodile and alligator and even the python! but no one listens! good ole aussies have had deer and ostrich farms for ever and no worries, mate!

German Bakery was definitely not the representation of what real "Pune" is (or rather "was" because Pune is changing so much now), but having blasts in the city definitely made the average Punekar get the reality check. As Punekars we always believed "all is well" and no matter what happens in other parts of India, we, Punekars will always be safe. This was a big reality check, unfortunately learnt at the price of innocent lives.

It's horrifying, frustrating and saddening to see terror has become such a common occurance nowadays. I truly believe that as ordinary citizens we need to better equip ourselves with tactics of fighting with terror. If we just reply on governments and police officers, that's not enough.

Grief about any accident or incident of sorrow , however best tried,can not be erased, if we cross a spot in our car where many years before some one known or remotely known in an accident passed away , comes as a shock when we near the spot and our heart beat goes up although we try to maintain our composure and auto- suggest that they passed away long back.Memories never fade when we either associated with directly or indirectly

@Raj47 - I completely agree with you as I am also a person for animals. But these pleading will fall in deaf ears in Kalyug.

the other day, I saw a person whining & complaining, for the simple reason that he was being checked at a mall...

i think we all contribute & are part & parcel of this mess,... we do not like to be monitored...but nevertheless do need to be protected,...

we are cowards, & have always been that way since time immemorial, that should explain all the insurgence now & the invasions back then...

the comical part is that it also takes a lot of courage to shed our ego & accept the fact that we are indeed cowards...

Ms.De, I got your blog from Prithwish's and would admit that I have been a great admirer of your writings.

The Pune blast has again added to the pains and terrors that accompany any blast...irrespective of the place , comminity or the section of the human kind that it has been targeted to...I often wonder what kind of a life and society are we providing to our coming generations , where no one is safe...Its high time our policy makers to take some strict measures to let the world know that we no longer would succumb to such devastations....If we don't take measures now then many more 26/11's , Pune , Delhi and Mumbai blasts would take place....

Its high time for us as well to show some responsibility towards our society by reporting anything unusual in our surroundings to the police......

well, how can u legalise to kill sumthyng?
i guess even they have right to live!!
doesn't make a sense to me!!
:(

I like your posts. The way you write. Well. Most of the time. This post is quite a different perspective of looking at the issue. The other being the perspective of a person who lost his loved one in the blast. Mine.

Please read, I dunno if you can spare time, http://aggurocks.blogspot.com/2010/02/blog-post.html

Why I want you to read it is, apart from feeling sad for our loss, in the hope that you might suggest us something other than shrugging and fooling ourselves that all is well.