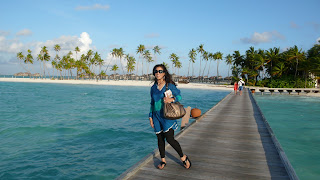 Since this column is about the Maldives, I thought, why not lagao one more image????
*

Our man in the Maldives….

love dogs. I love cats . I like all animals. And I think treating one animal in a lesser way because of religion is a stupid thing. I think that religion needs revision for God's sake. ( aah the irony?)


The islands are amazing. Wish I could go back sometime :)

`definitely needed a drink. A gallon of champagne. '

and that too in an island :)

And the place sounds interesting.

that is one wonderful picture. and though i didn't want to comment on your looks, am forced to say you are looking great :)

Your post has made me plan a vacation to Maldives next :D

thanks for describing the details so well :)

What I like the most:
Palm trees, The blue water And the white sand.

There is one important missing point mam, its about Maldivians' hunger for Tuna fish.Whatever you eat, you ca find scraps of this fish-even in snacks!!One more interesting thing, if your flight fail to touch at the exact starting point of runway, you will find yourself swimming after a while.

Who is that girl?

Send Christmas gifts and flowers to USA from http://www.giftflowersusa.com/Christmas_Usa.asp and add a zesty surprise to the celebrations of your loved ones. Convey your heartfelt appreciation for your dear ones in United States of America with our stunning flower arrangements, fresh fruits, sensational gift hampers, lip-smacking gourmet hampers, yummy chocolates, stirring holiday hampers, delicious cakes and more gifting options. For details, visit http://www.giftflowersusa.com/Christmas_Usa.asp.

Mam Why u are blogging such a lengthy article?? We like small and quick Cheers.

Nice one. Maldives is a beautiful country and so are the people there.
What i learnt on my visit there was that the country ranks amongst the highest in Divorce rates in the world. And it is common for people to be married 6-7 times in their lifetime. The local men have a wife on each of the island they visit and marriages are usually a short term affair for them.

Hi Mam, I'm a great fan of yours. I was in Male from 1995 to 1999 with my husband and two children. My husband was posted as a consultant in the Indira Gandhi Memorial hospital and had to train the locals on how to run the lab. The place as such is great aesthetically but the mindset of the locals was horrible. We survived because of our white passports. These fish brained fellows have nothing original and have to depend on other countries for everything, but the TITANIC ego that they have is really surprising. We used have fun listening to Maldivian film songs with music from our old Hindi hits of the 60s and 70s. The lyrics were in Diwedi the national language of Maldives. The Maldivians are very good in arts and keeping the environment clean. This was something appreciable. Marriages in Maldives are nothing more than timepass. The country as such has taken up the responsibility of the children who have n number of parents. Also age is no bar, a 17 old boy can have a wife of 30 years. OK mam talking about Maldives can go on and on. I wish you all the best and pleasssse keep writing.