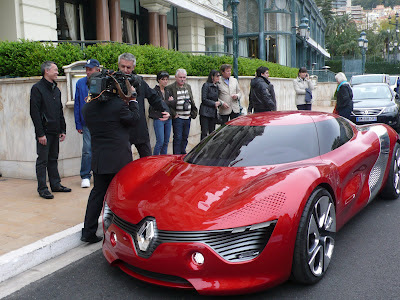 I photographed this vintage beauty in Monte Carlo....

This appeared in the Sunday Times....

If the beefy John Abraham’s biceps are being flexed more than usual these days, it is with good reason. Abraham is one of the producers of this season’s sleeper hit, “Vicky Donor”. Let’s call it V.D. for short.The movie is an absolute original as it goes into forbidden territory with an insouciance that is rare in Hindi cinema and entirely disarming, given the subject – sperm donation.In a country of a billion plus, one would imagine that our last priority (or concern) would be sperm production. Again, given the stupidity of sperms,it is still more surprising that we face something of a shortage when it comes to robust sperms.British scientists tell us sperms have an ‘”appalling sense of direction, crashing into walls and each other in the race to reach the egg.” Scientists from the University of Warwick and the University of Birmingham have discovered that those silly sperms ”avoid the middle lane” of the female reproductive tract, preferring to hurtle along channel walls.They have eloquently compared the crazy sperms’ race to a “demolition derby.” Just as the world is shaking its head and wondering why the blessed sperms are so clueless, comes an Indian movie that tackles the subject head on. While the broader story revolves around the rather touchy topic of infertility and the travails of couples facing a life without kids, at the core is an entirely clever script that revolves around the strange bond between an infertility expert doctor( marvellously played by veteran Annu Kapoor), and Delhi boy Vicky, a ‘vella’ ( what a terrific acting debut for Ayushmann Khuranna)who lives with his hard working, widowed mother Dolly, and his feisty grandmother in the refugee colony at Lajpat Nagar.The experienced and wily doc identifies Vicky as the perfect donor after spying on and studying the easy going, cricket playing young man’s laidback lifestyle.The challenge is to convince the hero to donate his sperm (for money, of course), without anybody discovering his secret. The doc stops at nothing to lure the jobless fellow into his clinic, and deposit a sample, the chief inducement being easy cash.Some of which is paid upfront,while the rest handed over only after his robust sperm has done its job and impregnated some grateful recipient. To achieve this objective the doc convinces Vicky (with the help of a map that traces Alexander the Great’s journey) he’s doing something noble and admirable.Absurdly enough Vicky falls for the trick and starts believing he is a true Aryan, just like Alexander and his soldiers who had impregnated local women, leaving descendants with perfect Aryan sperm behind. The doc calls Vicky an asli Arya Puttar . Flattered by the spiel, a totally baffled but broke Vicky becomes the Doc’s star donor, a prized stud, with an incredible strike rate.

What follows is a madcap caper till the lid is finally blown off poor, exhausted Vicky’s cover and his beautiful ‘Bangalan’’ bride discovers what exactly her adorable husband does for a living. Unfortunately, the discovery leads to shock and revulsion as Vicky is shamed and disowned not just by his embarrassed and embittered wife, but his mother, neighbours and pretty much all the people who matter to him.The narrative is suitably loaded with choice Punjabi abuses.

One can enjoy the movie as just a quirky comedy if one wishes to. But it is much more than that.The film exposes several prejudices we harbour about sex and sexuality.About marrying a divorcee (Vicky’s bride) - a revelation that enrages Vicky’s mother, while the whiskey guzzling grandmother,is perfectly cool about it. Then there is a track about Vicky and Ashima’s inter-community marriage - a subject that remains a prickly issue across India even today.But at the heart of the film is the touching story about an innocent, somewhat lost young unemployed guy , a canny doctor, and an entire social construct that refuses to table an issue like sperm donation because of some inexplicable ‘shame’ involved in the procedure, which in reality brings so much joy into the lives of childless couples.That the subject is treated with humour, understanding and sensitivity is a tribute to the brave team (take a bow,Director Shoojit Sircar )which went ahead with as unconventional a subject and pulled it off. One is guessing there will be a better awareness of infertility after this movie. But more importantly, the S-Word is no longer taboo.

I bet the next big hit will be Eye Donor, starring some Eyeushman. Though the writer will have one big challenge here - unlike the sperm, the eyes can only be donated once, that too (preferably) after death...

Agree with you, S-word is no longer taboo. It was amusing to read article in newspapers reporting about infertility clinics getting flooded with calls from sperm donors after watching the movie. Little did they know that the process of sperm donating is not as simple and lucrative as shown in the Movie.
Err...the car in the picture is quite futuristic, it's an electric concept by Renault called DeZir. It looks amazing on the inside as well, here's the link to it's website: http://www.renault.com/en/innovation/l-univers-du-design/pages/concept-car-dezir.aspx
Would love to see more pictures of monte carlo and taiwan esp. sun moon lake.

I enjoyed the movie too!

I love this blog and can’t get enough of every aspect of it. You are a fabulously talented writer and manage to make everything so relatable. You are so good at this in fact, that sometimes while reading I feel like our hearts and minds become one and basically I feel as if I am reading my own thoughts.
Establishing Business Value

At X Check Solution, We view a web site as an additional tool to assist your efforts in delivering information, ideas or goods. Plus, with good experience in marketing, communications, electronic publishing and web design, We possess the know-how to help you every step of the way!
Web Design & Development in india

Well written article. I loved the movie as well. It had all the right elements... Infact, it's the best movie of 2012!

Btw, I would love to know your thoughts on Satyemev Jayate. Looking forward to an article from you.
Here's what I have to say on the show: http://divyavirmani.blogspot.com/2012/05/satyemev-jayate.html

Above all, I loved the emotion between Vicky and Ashima. So awesomely played by the couple. Ashima asking Vicky 'GHAR CHALE' at the end...
HUH!
Especially when the couple are separated for any reason, these two words sound like heaven on earth!
I only hope, the separation rate in India goes down as much as possible!

I read your blog.ie nice blog..i want to know about sperm check test at home.plz suggust me.

I am regular reader of your blog and no doubt it all stuff is awesome. The best thing about your sharing and posting is that you always provide content that is helpful for both the newbie and experts.Sperm Donation India