Keep those clothes off, Harry! 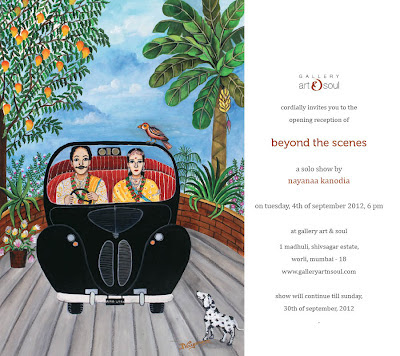 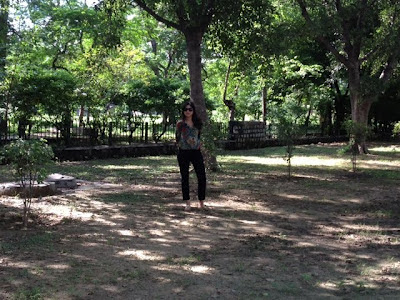 That's Arundhati in Delhi - a city she loves! Especially because it is so green and clean!

And that's Nayanaa Kanodia's invitation. I like Nayanaa's work - naive and telling. Years ago, I had picked Nayanaa to collaborate with on a canvas that was up at a charity auction, some years ago. She has her fans - I am one of them....

The Prince and the Vegas Girls!

What’s wrong with the world? Why is the otherwise slutty British press frothing at the mouth and getting moralistic? Who doesn’t want a sneak peek at the Crown Jewels? All that big fuss because Prince Harry did what any hot blooded young man would in Vegas – got naked at a wild party? Puhleeze – stop! Prince Harry is not your average Joe the neighbourhood plumber. He may be third in line to the throne. So bloody what? He is a man, first. A very naughty man, at that. Track record ko dekho! Take a look at the scenario. Princey goes to Vegas with a bunch of rowdy mates for some much-needed R and R. Why do people go to Vegas? Not to pray…. not to behave like they are at a funeral… not to save the world. Vegas attracts hard core party people from across the world. And high rollers who are mad enough to think they’ll beat the casinos and make money. Why was the Prince there? To have fun. How did he land up in a fancy suite with ‘hot chicks’ for company? Oh come on… he is Prince Harry. Not the Dalai Lama. Hot Chicks are a part of his environment. He just has to breathe – and there they are. Well… the buck naked part of the story kicks in after the reckless and recklessly handsome Prince decides to play a few dicey games with these adventurous ladies. Adult games. Games that involve stripping. Getting nanga. Till this point, the story reads just fine. The Prince and his lads are starkers, as are the luscious girls. The stakes must have been as high as the party goers, for nobody noticed the cameras. This is the seriously dumb part. Clearly, the Prince was aware that pics were being clicked, since he assured a naked female companion that he would gallantly guard her modesty with his own body! That’s class….however Harry forgot to cover the royal butt when the cameras went click- click. In one photograph, he is seen hanging on to the crown jewels with his hands…. even so, a few glimpses of Little Harry have already set the internet on fire.

My question is broader in scope :The British establishment is outraged and feigning shock. Why? The Defence Ministry is threatening to strip the 27-year-old pilot of his Apache duties , claiming he is not cool headed enough to fly this big, destructive machine. Really? The guy was set for a second round of duties in Afghanistan. Are all those soldiers fighting a useless war in Afghanistan really cool headed? His father has apparently banned him from future ‘boys only’ binges, according to reports. The irony of it all! Prince Charles had an equally wild reputation in his time … he can hardly afford to discipline the boy! Even sis-in-law Kate Middleton has been roped in to keep Prince Harry home and occupied. Her strategy? She’s giving him cooking lessons. So far, Harry’s grandma, the Queen, has wisely not uttered a word. She has raised quite a family herself, and seen a lot of hairy stuff along the way. This is the 21st century, not Victorian England. Harry is young, wicked, rich, single and good looking. Yes, he drinks more than he can handle. He parties hard with dodgy debutantes. He staggers out of night clubs. He throws up. He changes girlfriends as frequently as his socks. He’s normal. Hota hai! He hasn’t killed anyone or otherwise behaved in a violent, unbalanced, dangerous-to-society manner. Perhaps, his latest romp can be dubbed conduct unbecoming for a member of the royal family. But unlike his indiscreet grandpop who routinely makes racist and sexist comments and embarrasses the Palace, this guy’s lifestyle is that of a spoilt brat… a pampered rock star. Nothing worse. Let him cavort naked in Vegas… what difference does it make to world affairs? Let that hot chick make her millions out of selling those stolen pics. There’s a whole world of opportunity out there. It’s a fair free- for- all. The Vegas party is over. We have all seen Harry’s butt and privates. We have not fainted. We understand it’s all in them genes. How can the younger son of Lady Diana and Prince Charles be expected to behave like a monk?

Give the lad a break. Crown him King!

Make him king ? You mean the Monty King ? :P

Beg to differ on this one.
People do go to pray in LV even if it is may be to make a killing at the tables.
Trust me I was zapped to see the crowds at the Catholic Church during the weekends. If one did not go 15 minutes prior to the service commencing, they would have to stand outside.
It changed my mind about the Americans. They too seek God.

completely agree with what u say,
even his parents have never behaved like the purple blood did in earlier generations- having flings. this boy is just doing what rich spoiled kids do these days.
-kpg
kohllined.blogspot.in

liked the post...this line was bulls eye..."How can the younger son of Lady Diana and Prince Charles be expected to behave like a monk?"

Some of the quotes in here are right on bulls eye. haha I actually like prince Harry more so after this "I'm human too" moment in Vegas. The other pictures of him making funny faces and etc all shows he is well aware of all these. The cherry on cake is his normal naughty behavior revealed his inner humbleness. He showed the world, "I might be important to you but I don't give a damn as long as I get my share of normal fun." lol I'm officially a fan now.

He is a celebrity no doubt, and a very good looking one at that. He would definitely have paparazzi and the internet abuzz with his actions. But yes, he's a hormone raging human too, and I feel these actions prove that no one can be perfect, not even the purple blooded. Nice post Shobha !

wonderfully said Mrs De.
Kya kehna.No one can and shpuld try to maim the human pulse.
I would just say ki even if Mr Dalai Lama wants to go naked, what is wrong in that.A jewel would always be a jewel whether royal or godly.

Touché, thoroughly enjoyed reading the post. Let the young have fun, if it's not at the cost of other's comfort.
P.S. Hey, you have an amazing vocabulary, I shall be grateful if you could share any tips for improving one's vocabulary?

Though he has got these things in his genes, he is expected to behave decently as he is not an ordinary citizen like any one of us. Since it is a matter of decency on the part of an individual, we need not bother much about all this. You rightly pointed out, "..what difference does it make to world affairs?" Nice post and very good use of `irony`.

I have just downloaded iStripper, and now I enjoy having the hottest virtual strippers on my desktop.