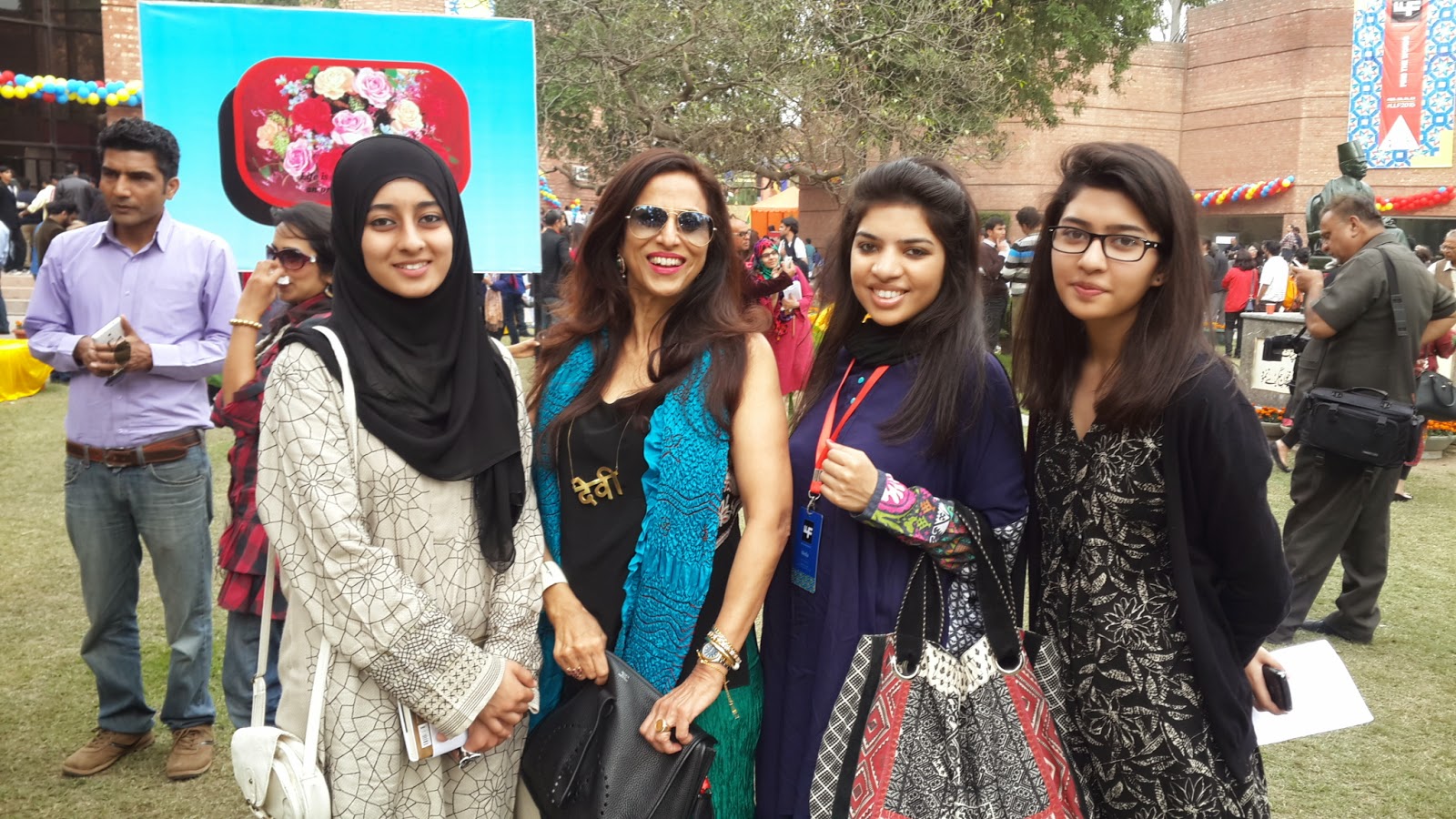 Sorry! Sorry! Sorry! I have been away from this wonderful space for way too long! No excuse is a good excuse! This is a lovely, relaxed pic from the just concluded Lahore Lit Fest, which I thoroughly enjoyed! Great sessions and daunting odds...  security issues and the threat of suicide bombers apart, what a rich feast it turned out to be.
**************

Attn: Meenal, Jaideep, Sudipta          Mumbai Mirror              19th Feb 2015
Toast the Roast! And do “Shut up”, everyone!
Aamir Khan is a cool customer. He says what he has to, and then retreats. The wars carry on, but Aamir stays out of the battlefield. When imported Comic Russell Peters asked India’s most well known ‘thinking actor’ to “shut up”, Bollywood was stunned! Nobody asks Aamir to shut up…. nobody! And who the hell was this Peters chap anyway to have the audacity to publicly insult one of our icons? This was one set of outraged reactions. The other lot gloated and crowed, “About time someone told Aamir where to get off.”
Amazing what a  Roast can trigger off !
Now here’s the really funny part. So many people one has met after the Youtube video went viral, have zero idea what a ‘Roast’ really means.  Quite a few assumed it was a dinner party featuring grilled food. Which made me wonder if, in its “new, improved’ avatar ( assuming there will be one soon), those clever boys at AIB (provided they aren’t thrown into prison  ), will rename their immensely popular event  “Tandoori Nights” – not only will more people get the meaning, but it will sound less derivative, too. Participating in a live grilling requires guts and an uber cool quotient to go with the spirit of the show. If you lack these essentials, stay away – from watching or being a part of it. There is no hidden agenda here  –   aggressively breaking moulds and mocking establishment mores , are the stated objectives.Of course, offence is given! That is the whole point! The script is vetted by participants, and yes, some of the more risqué jokes are designed to shock and awe. So what?
So what???? A lot! Going by the holier-than-thou reactions still raging. Cases have been filed.  There  have been several public outbursts. Hostility, rage, accusations, hysteria. My question is: Is this backlash genuine… or manufactured? Politically motivated or spontaneous? Going by the well orchestrated campaign against AIB, I’d say there is an organized attempt to scuttle something that can capture the public’s imagination and grow into a powerful entertainment property. Sounds like plain , old jealousy to me. Which is a pity. There is space for Roasting in a country that prides itself on its sanctimonious, self-righteous, pious ‘values’ , but in reality, demonstrates exactly the reverse. We insult our women routinely – and nobody finds that offensive? We discriminate blatantly against the LGBT community. And that’s okay? Our top stars endorse fairness creams – no problems with that? We burn churches, stone temples, raze mosques, but refuse to apologise for our violence. Violence against people we don’t accept, approve of, understand.
And Aamir Khan found the Roast ‘violent’ ?
Aamir is a  highly privileged VVIP in India. Those AIB guys are not! If someone decides to go after them, there isn’t much they can do to defend themselves. Their budding careers can go for a toss, and chances of getting gigs in future are pretty remote. Is this a fair war? Every interest group is jumping on the AIB band wagon and demanding apologies. Apparently, there is hardly anybody left in the country who hasn’t been “offended’ – from forgotten character actors to religious leaders.
What a fantastic coup for AIB! Overnight, a brand is born. Never mind the inbuilt  threats to its existence, going forward. It’s a brand that has the power to influence mind sets across the board, and if correctly leveraged, it can also impact entertainment policy. How far is ‘too far’ is something only a society can decide – not moral commissioners sitting in judgment and condemning anything and everything that does not conform to their personal thinking. These very people could be considered deeply offensive by their targets – who knows what they actually stand for, other than tyranny?
There has been a pretty energetic attempt to create ghettos of  ‘Liberals” and isolate them. Almost as if these ‘culprits’ belong to a new class of social pariahs who are ‘bad for society’. But what about the lives and ‘values’ of those persecuting the AIB ? What if their ‘bhandas’ get broken? Or is that the actual problem? Are they really concerned about the delicate sensitivities of the public at large… or worried about their own skins?
Often, I hear absurd and patronizing arguments about  “Indian society not being mature enough” to understand humour! Really? Who decides? AIB  folks are soft targets. If their critics have such a socially developed conscience, they should go after the real villains in our midst – rapists, sadists, and all those Godmen and Godwomen, maulanas and  religious fanatics who use vile language and abuse everybody. Go on… prosecute them, too!


Will anyone dare? You bet not!
***********
Attn: vandana, neelam         Politically Incorrect             14th Feb 2015
From Baap ka Raj to Aap ki Seva…
My short trip to Delhi couldn’t have been better timed. This was exactly a day after the dramatic election results that astonished everybody – Arvind Kejriwal included. The old school Dilliwallas I met were in a state of shock. Frozen. They weren’t thinking about Arvind Kejriwal – they were thinking about themselves. Suddenly, the heady, giddy fifteen year old hedonistic party was over. It was abruptly aborted, and bar was declared shut! There was no time for a last minute ‘chhota’ or  even a decent hangover. And people were holding their heads in utter disbelief, wondering what had hit them. Those I spoke to, were candid enough to admit their personal and professional lives were shaken and stirred like never before. Nothing was going to be the same again, they lamented. Making me wonder what exactly they were talking about. A swash- buckling tycoon sighed,“ We were just about coming to terms with Narendra Modi’s style of functioning…. that wasn’t too worrying. He is new to the Delhi game, but a few of his trusted aides are old foxes. We had dubbed this the UPA -3 sarkar – the worst aspects of  NDA and UPA combined went into the formation of this motley bunch.  They look tough and different from the outside, but are essentially cut from the same cloth. Cracking their code would have been a cake walk. But with Kejriwal on the scene – the dynamics of power have changed. Nobody knows how to handle this topsy- turvy  new lot.”
Unknowingly, the man had hit the nail on the head.
Overnight, it’s the person on the street calling the shots. Yes, the very person who had been treated like dirt for decades. Taken for granted. Ignored. Delhi is not used to dealing with the common man on equal terms. Uncomfortable with those viewed as the unwashed masses, the Capital’s “koi hai” crowd is totally unhinged and unsure how to react to altered  dynamics. First, a Chaiwalla turned up and made it to the top job as India’s Prime Minister when nobody was looking. And now a Jhaaduwalla  is the Chief Minister of Delhi!Really! This was too bloody much! So damn unsettling! Even the bearers in the Gymkhana were acting cheeky these days!
So, what does the ‘other’ Delhi want? What does the ‘real’ Delhi expect from Arvind and AAP? Actually, it’s pretty simple stuff. The requirements aren’t unrealistic, nor are they all that lofty. The people of Delhi want basics. Period. Just basics. Like people elsewhere in India or the world. And honestly speaking, they don’t really care about the price tag on Narendra Modi’s comical suit. They want roti kapda makaan. That’s it. Had the BJP focused on these three essentials, perhaps, they would not  have suffered such a humiliating double loss. The Congress, of course, can safely go back to twiddling its thumbs for the next 20 years – it’s something they are very good at, even when they are in power.
For Arvind to retain the faith in him and his party, he has to do far more than make hard-to-deliver promises. When he announces fantastic sounding schemes or says he is going to take on corruption on a war footing, people have to believe he will actually succeed… and succeed quickly. A  corruption hotline, seems like a good place to start. But how practical is it? Given the staggering extent of corruption, the hotline itself may crash! Introducing the Lokpal Bill or demanding Statehood for Delhi  are trickier issues. The trouble with a mandate like this, is that voters expect miracles. Arvind has a jhaadu in his hand, not a magic wand. His stated objectives are all praise worthy, but, as everybody knows, getting anything done in India, requires more than just honesty of purpose. A 70 point agenda sounds impressive. But hey – how come there are no women in the cabinet so far?
Arvind’s  aggressive anti-corruption campaign will be stalled at all levels, not just by the entrenched interest groups in Delhi. His win has shaken the entire political system ,well beyond the City of  Djinns. Nervous Chief Ministers across India are watching Arvind closely, worried about their own fates and skins. If this can happen in the country’s Capital, it can happen anywhere. This is the real triumph of the Delhi election. More than the victory of Arvind and AAP (“ Janata ka CM hoon”, he sweetly dimples)  it has been a stupendous victory of the people. Sick of the government’s ‘ I am your Baap!” attitude, it is now time for AAP – a party of regular folks, representing regular aspirations. All they want is an improvement in the miserable quality of their lives. They pay taxes. They underwrite the running of the State. They are in a position to demand they get what they are paying for. It is their money that has been systematically looted.
Payback time is here.
Is Arvind the man who can do that?
Nobody knows for sure. But he certainly has the rest of the country rooting for him right now.
From  nightly whiskey-sodas to all day  cough syrup, Delhi is slowly coming to terms with politics,  Arvind-ishtyle! Cheers, everybody!
*************