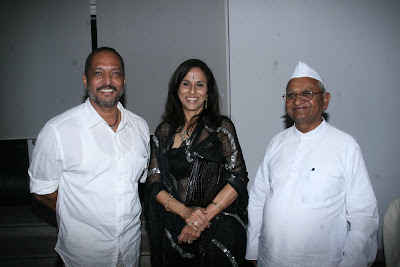 Guys, do correct me if I'm wrong, but I haven't heard or read anything from Anna Hazare after the horrific bomb blasts that once again ripped Mumbai apart.
I expected some strong words of condemnation.... especially after Rahul Gandhi's shocking , ill -informed statements which more or less condoned terror attacks!
Well.... this picture was taken last week at the Star Majhaa Awards. I must say, as an awardee, it was a rare honour for me to be sharing the same platform with Anna, who said he'd accepted this particular award only because it was given by people 'with clean hands'. Nana Patekar, who was the chief guest, had a lot to say about that remark.... I shall not repeat Nana's comments here!
We in Mumbai are waiting for something more than lip service from the Centre.
Posted by Shobhaa De at 5:48 PM

Out of sheer curiosity, i was browsing through google news of all countries as to how they report this new mumbai incident. I was shocked to note that countries like Turkey, Oman, Senegal, Egypt have completely blacked out this news.I cannot fathom the reason behind this.

Why one should twist what rahul said and react?

Everyday all over the world so many blasts take place and in India itself the north eastern states are facing this. And we never react because we dont consider them as us.

Instead of wasting time on who said what, better to take some proactive precautions.

Let us pester Maharashtra's home minister and get more security.

So Anna aspires to be Page 3 celebrity as well.

I am amused that you blame Anna for not reacting to the Mumbai attacks. He is neither the PM, nor the CM, nor is he the Home secretary. Neither is he in anybody's payroll.
We are not paying our tax money to Anna.
Here is a man who is ready to kill himself so that we can get good governance & our money back in the form of healthcare, infrastructure, sanitation, good education & yes, unpenetrable security. That's what we pay tax for. He doesn't shout from rooftops like the politicians. He believes in doing & not talking. These blasts, unrealistic cut off percentages in marks due to lack of sufficient colleges etc are reasons why we should support Anna in all his endeavours.
I don't think any of us armchair critics who have done nothing for the country have any voice to criticise a person of Anna's calibre. He is way beyond our class.

i completely agree with what latha said in the last comment...

we must stop criticising the person who wants to do something good for the country..

[Apologies for the edits]

I'd agree with Priya Dutt's argument that these kinds of tragedies are unavoidable were it not for the fact that we have a near complete failure of policy implementation. I would rather have her answer for the out and out policy failures and talk hard facts in the media rather than try and placate us with vague cliches.

I have been going to the BMC office at Nana Chowk for my dog's license every year. There is a large door/metal detector there... a cop may be there on a chair a few feet away, engrossed in whatever - people side-step the detector and go in. Others who are exiting the building come out by going through the detector. It's a free for all and nobody's accountable.

The cops made a claim that they sent a public service SMS to everyone yesterday. I didn't get it, neither did my mother or a friend that I spoke to. I have subscribed to the DND registry to avoid spam messages but they get through almost daily. A critical msg somehow does not find its way through. Will the cops actually bother checking if the msgs went through? Doubtful. Barkha Dutt took them at their word and that's good enough for everyone, apparently. I realize that this is a very trivial example in light of recent events, but it shows everything that's wrong with our system. Tall claims, big policies, big promises and ZERO follow up.

We need some kind of a smart citizen's committee that has the backing of the people and that suggests security measures to the govy and monitors the way things are run. I realize it is the politician's job to do this but they aren't and that's the bottom line. It is a sad state of affairs but if we want things to change we need to stop talking in scattered voices and get together. We have the right people, we certainly have the will - we just need the spark to get us started.

This time they spared the local trains.

Their target seems to be a particular group.

Why should Mumbai people pay for the sins committed elsewhere?

What a contrast... Nana looking young anna[brother] and Anna looking like nana [grandfather]:)

I really dont know why Anna Hazare should comment.I would rather hear our home minister & PM talk about security.

Anna should have commented as people of Mumbai stood by him by going on all night long candle vigil during his fast. Will it be too much now to share their pain as a fatherly figure?

Get the best deals on fashion, gadgets and experiences on eBay.in. Like us to stay in the know!.

SECRETS of losing weight revealed by India's top health guru. Find out more. 'Like' this .

For those who hate her stupid articles in the news paper

According to her every celebrity is a wana be because they are more famous than her, she pities every beautiful women in the world coz they are not ugly like her. All the great people in the world are stupid because they have achieved something in life on their own and by doing something great unlike her. We don’t want so called “socialite” writing BS in the news paper with her one and only photoshoped pic with every article. She was never a writer for me

Website is very comprehensive and informative. I have enjoyed the visit. From www.righttoys.in/products.asp?item=DISNEY_Toys_India_Online&brand=188

Toys make a child happy and active. When a toy is there, perhaps a kid will not ask for anything else. One has to remember that a kid has world of imagination to live in, and toys give access to that land of imagination, constructed with joy. That’s what a toy mean to a kid. One can make a trip to www.righttoys.in/products.asp?item=FUNSKOOL_Toys_India_Online&brand=160 for further details.

@Prasad, you imagine that you look young like Imran Khan ? I'm fed up of this madness for looking sexy, glamorous etc ? Is that the only thing that matters ? Here we are talking about serious issues & you are bothered about how Anna looks ? Sit on a fast for 1 day for the nation & then talk about Anna.

what is your problem Shobha with Anna. He was on a anti corruption mission, and not a spokesperson for every event that happens in the country.. that is so narrow mindedness on your part.

The Key to the problem is to get organised in out thinking, action and intention at all levels or else we end up like those living in mucky flood (of terrorism) prone zone. Anna not speaking only shows how illorganised is he, both in his thoughts and as an organisation. No disrespect intended.

Where is Ramdev too? Wake up Ramdev this too is cancer of the society....eating into the very fibre

Kudos to Shobhaa Didi for at least speaking out. You can never please all.

@kakaka [I was shocked to note that countries like Turkey, Oman, Senegal, Egypt have completely blacked out this news.I cannot fathom the reason behind this] This may be as they do not want a taste of their own medicine. It only requires an idea to set the ammunition dump go up in smoke

Utility toys are conceptualized with the aim to develop the mental progress of a growing child. Toys from Fisher Price is just synonymous with this essential criteria.. Kids, without having to stress themselves, in no time, gets the fundamental learning exposure. Amazing, can sound magical, but true. That’s the one at www.righttoys.in/products.asp?item=FISHERPRICE_Toys_India_Online&brand=193 awaits you.

Anna is an anti corruption man. But Anna also praised Modi and Nitish. So no harm in speaking about the blasts.

Anna may be thinking that terrorist forces also a sort of movement against corrupt government policies.

Let us give him time. He has to consult civil society before giving statements.

To put matters bluntly, these bombings have gujarat connection. First one Rathyatra, gujarat riots and other related matters Those cases are to be solved and if those people responsible for communal riots are put behind bars like Suresh Kalmadi, Kanimozhi.
Whether we like it or not Raj thackeray's words about endless migrants which includes cross border migration as well makes policing an extremely difficult task.

Gifts are the projectors of your emotions. No matter how far you are from your loved terms, just a simple gift can put the lights on the dejected faces of them, who have been missing your presence on their special day. A gift actually brings your inner self before them. Visit www.hampersnationwide.com for details.

Goodluck is says wright. Anna doing correctly .It is our janam sidth adhikar .

I think Anna Hazare has every reason to say something about the Mumbai Blast, more so after he took the time to write a painstaking letter to the Prime Minister after Journalist Dey's murder. Otherwise, one might be forced to conclude that Anna Hazare is much more concerned about the lives of the media persons (who have pushed him to this height) rather than the lives of innocent civilians.

This post has been removed by the author.
http://www.hitecvalves.com

I think INDIA is capable of handling its own affairs. Or is it not?

We saw the democracy working on 4th June night. We saw democracy when they call Anna, Baba fraud but Osama Osamaji.